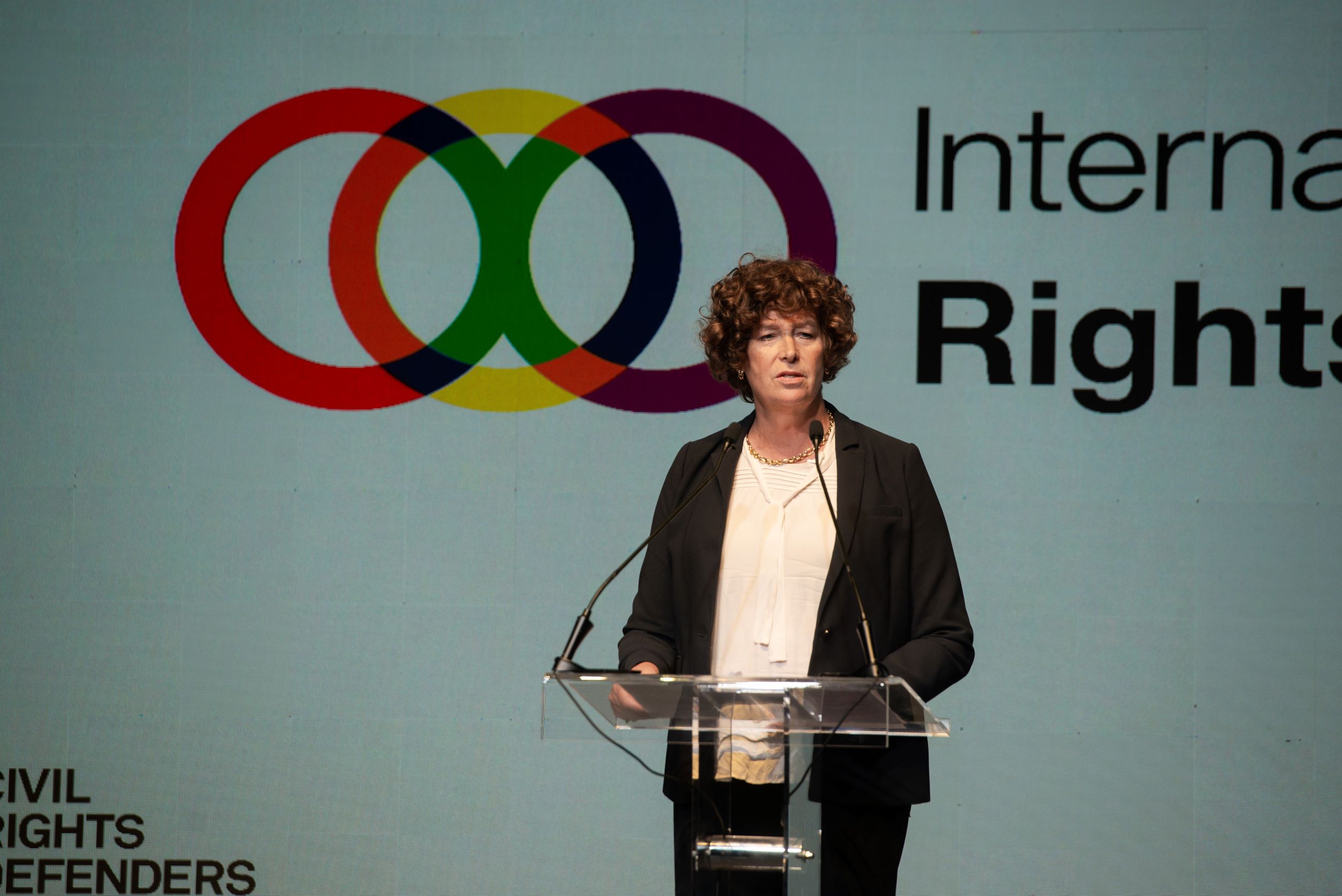 Let me start by saying that, even though tensions are running high, I didn't hesitate for a second to be here, with you, today.

These past few weeks have been symbolic of the struggles LGBTQI+ people have always known. Prohibiting a pride, makes us invisible. It silences us.

But our love is not a crime, our existence is not a felony, and our message should always be heard.

And that message isn’t earth shattering – it is actually quite simple: we are proud of who we are, we don’t want to be discriminated against and we deserve equal rights.

No, it’s just claiming the same basic human rights as everyone else: the right to dignity, the right to live a life free of discrimination, the right to respect for privacy and family life, and so on.

That is why I am here today – because I strongly believe that, as a society, we should not give in one millimeter, when it comes to defending our basic human rights.

I am here because your dedication and enthusiasm to make change happen, inspires me.

I am here because I believe in solidarity and joining forces.

To be frank: what has been happening in the past few weeks here in Serbia, and what is being said, obviously worries me.

Far too often we see LGBTQI+ people being used as chess pieces in a political game. And this game is driven by a very conservative movement, that is often opposed to other fundamental human rights as well, such as sexual and reproductive rights, the right to divorce, access to contraception, access to safe and legal abortion (as we see in the USA these days).

Furthermore, we are seeing countries, such as Hungary, establish anti-LGBTQI+ laws - following the example of Russia. This evolution is not innocent.

Anti-propaganda laws are threatening our visibility. While representation and role models are very important. Especially for young people.

Because picture a 17-year-old, who knows he’s gay, but he seems not to find anyone around him, on TV, in the media, that is just like him... In school, homosexuality is not even mentioned and ‘gay’ is mostly just used as a swear word.

Picture a 16-year-old trans girl, in the very same position. Or an 18-year-old who has bisexual feelings. They may feel alone, weird, abnormal, helpless, hopeless.

This is why visibility and representation are extremely important for everyone out there who is still questioning their gender or sexual identity.

But rather than focusing on the problems, let us focus on what we can do about them. I’d like to highlight three focal points, that I believe are quite important.

First, I’d like to stress that this is not an issue of ‘east against west’.

There are many people in countries such as Hungary, Poland or Serbia who do believe that everyone should have the same protection against discrimination. People who believe everyone should have the same rights, regardless of who they are or who they love. I’m happy to see that a lot of hearts and minds are positively changing, often inspired by young people who dream of improving society so that we leave no one behind.

Moreover, I'm not here to lecture anyone on how to approach things – every country is different, every country has its own history and culture. And there’s no blueprint for the safeguarding of LGBTQI+ rights.

And even though Belgium ranks third on the Rainbow Index, my country too still faces challenges. We are, for example, still adjusting our legislation concerning legal gender recognition, intersex people or a ban on conversion therapy. And also in Belgium many LGBTQI+ people are still facing forms of violence throughout their lives.

I do hope, on the other hand, that countries like Belgium, but also Denmark or Malta for example, can be an inspiration to other countries, as we are one of the pioneers in providing a strong legal framework to ensure equal rights for LGBTQI+ people.

And at the same time, I’m here to be inspired by activists from Serbia and many other places. Your stories and your actions are what inspire me and what we can learn from.

In this context, I think it is also important to stress that rights are never acquired or obtained forever. We must always remain vigilant. We must keep supporting each other, we must always protect ourselves and our acquired rights.

And if necessary, we need to take legal action. Europe is founded on the principle of protecting human rights. And they must be safeguarded at all times. That’s why Belgium for example will support the infringement procedure of the European commission against the anti-LGBTQI+ law that Hungary deployed.

Secondly, and maybe the most important: we need to work together. Solidarity can be a powerful weapon against hatred – because it strengthens people’s sense of not being alone.

We must seize all opportunities to build alliances: between activists and politicians, with civil society, with whoever wants to be an ally.

Therefore, we must also work with other movements - with people fighting for women's rights, for example, or for the rights of other minorities. Sometimes they try to turn us against each other - but it is important to counteract this polarization. United we are stronger, as our fight is a shared one.

And especially here, at events such as the Europride, we have a unique opportunity to connect with so many people. This is a place where we can learn a lot and discuss common strategies.

On a more international level, there’s also still a lot of work to be done. Today, in 2022, more than 70 countries around the world still have discriminatory laws that criminalize consensual same-sex conduct or certain forms of gender expression. And even in at least five countries, LGBTQI+ people are still sentenced to death. We cannot turn a blind eye on this horrific reality.

Therefore, the most pressing issues internationally are to stop the criminalization of LGBTQI+ people and protecting them against discrimination. Luckily, we also see positive changes in many countries. And at UN level, too, this got higher on the agenda, for example by the appointment of the Independent Expert on Sexual Orientation and Gender Identity.

Lastly, I am convinced that each and every one of us can play a role in making change happen, especially if we join forces. Many of you are already doing this every day. Just by being yourself. As people’s attitude towards LGBTQI+ rights tend to change when they get to know people who identify as LGBTQI+.

And sometimes your impact may seem small, but you could make a big difference in the life of a friend or a co-worker. And perhaps, you’re in a position of power, and you can make a fundamental change towards a fairer world, by adjusting your policies.

And I know that this is not always an easy task. It might take a while, and sometimes there will be setbacks. But if all of us make even a small effort, together we will make a huge difference.

Today I take the floor here and speak to you as Deputy Prime Minister. Today, I am also fortunate enough to have this wonderful and beautiful woman by my side, who I can call ‘my wife’.

But don't forget that my road to get here was not always easy either. I, too, had my ups and downs. And even today the personal attacks, directed against who I am, sometimes still crawl under my skin. They make me vulnerable and sometimes even scared.

But it is gatherings like this, where everyone is working towards an equal goal, that give me courage, hope and energy to keep going. It is because of brave people like you, and all those who came before us, that I stand here today. People who had the courage to pursue change, at times where others were not convinced that ‘love is love’.

And if I may offer you at least one piece of humble advice – as a woman of an undisclosed yet blessed age: I believe that we only become stronger through the love that unites us. You’ll never find allies in anger.

I wish you all a very colorful week. Stay safe and stay proud.

Thank you very much. 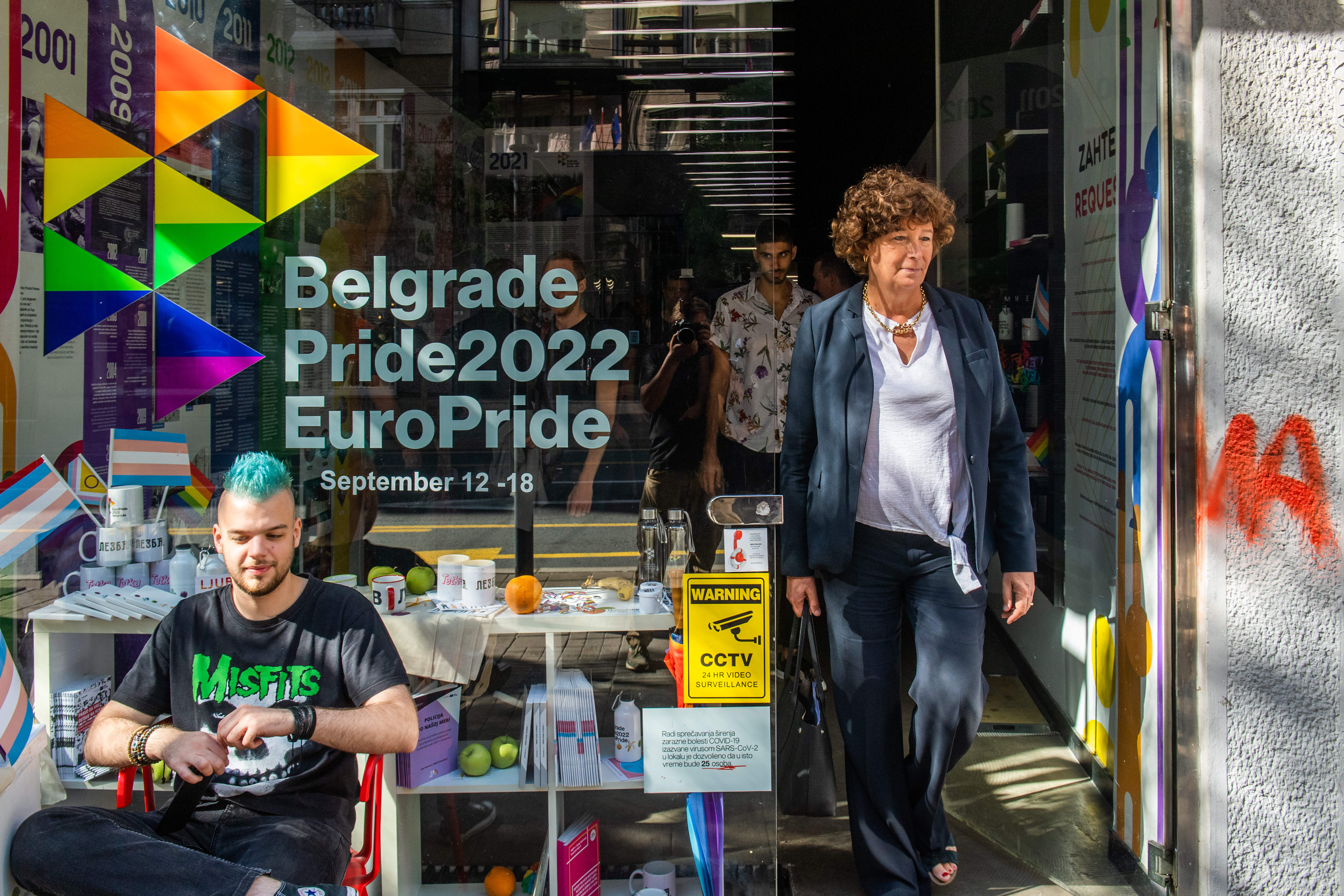